So once Immy was around 11 months old, we thought about trying for our second child, expecting it might take a few months (or even more) to fall pregnant. The reason being that our journey to having Immy wasn’t straight forward. I had 3 miscarriages at varying stages – but that’s a story for another day.

Little did we know we would fall pregnant straight away this time, and the thought of having a 19 month gap between our first two was perfect!

I’ll always remember the day we found out we were having twins. We went for an early scan (9 weeks) at Mothercare (rip). As the sonographer was performing the scan and we saw a heartbeat, I jokingly said “aw, just the one in there then,” to which she replied “that’s what I’m checking for now.” Fast forward a minute or two, and there we had it, clear as day on the screen there were 2 little heartbeats. We were in total shock, but not so secretly I was ecstatic. I’ve always wanted twins, and had always imagined myself with twins (I was surprised when I found out that Immy was a singleton).

Once the initial shock settled, my thoughts quickly turned to logistics. We’re going to need a bigger car, childcare is going to go through the roof, how will I cope with a twin pregnancy and a toddler?… (a topic for another blog)!

As you read this you may think, gosh she’s contradicting herself a bit isn’t she? Well, you’re probably right! Half the time it’s bloody hard work, but the other half it’s absolutely amazing. And I will say now, I 100% know how lucky I am to have three healthy children. One thing I will never do is take that for granted (although it is something I have to remind myself when I’m pulling my hair out and hiding in the downstairs loo). 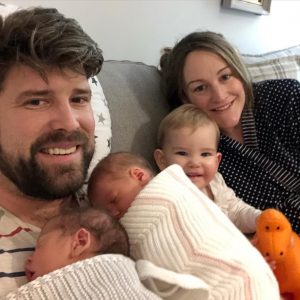 So back to the question. What has it been like going from 1 child to 3?

This was something that played on my mind a lot before the twins were born. All of a sudden my Facebook feed was filled with articles titled “why having 3 children is the hardest number to have,” and “3 – the most stressful number of kids.” Cheers for that Facebook, your algorithms are clearly not designed for pregnant women! I thought, blimey, I’ve not even been eased into this supposed nightmare number of children.

Fast-forward to now though, and I really haven’t known any different. Yes it’s hard at times and of course it takes longer to do anything; I have 2 nappies to change before going anywhere and I have to coax a toddler to try for a wee wee… and there’s always one who needs a last minute poo.

There are stressful days when nothing seems to go to plan (usually as a result of one of them not napping). There are days when everyone stays in pyjamas all day, Little Baby Bum and Peppa Pig are my babysitters, and I live off coffee and junk food. I’ve learnt that despite the negative press around kids watching TV, sometimes it’s needed. Anything to get us through the day!

Don’t get me wrong, there are brilliant days too. Those are the days when people tend to see us. The days I have it together (or at least seemingly so). The days I feel like super mum ready to take on the world (okay maybe the park, let’s be realistic). I’ve learnt to just do things now, and not to procrastinate about all of the things that could go wrong. Because worst case I just pack my three screaming children back into the car and come home and cry into my coffee (or wine). I love having three children, and I can’t imagine my life any differently.

In all honesty though, I personally found having one baby harder than having three. The shock of going from no babies to one was by far my biggest learning curve. Whether it was being a first time mum, Immy not being as chilled out as the twins, or perhaps the fact that we couldn’t go anywhere in the newborn days this time. Who knows…for me, it was hard.

One thing that I did, and still do find hard about going from one to three is the nights. Oh the nights! 3 young children vs 2 adults just isn’t fair game. We’ve never been blessed with children that sleep. Now I’m aware that could be as a result of something we’ve done that has resulted in bad sleeping habits. Or maybe we just have future ravers on our hands? I guess we’ll never know. Like many things with being parents, you just don’t know how it would have been if you tried something different – isn’t hindsight a wonderful thing. I always think, just do what’s best for you and your little ones at the time.

Another thing we weren’t prepared for when we made the jump from one to three was just how much stuff we would need. Our once somewhat spacious living room was suddenly crowded with toys, swing chairs (x 2), a travel cot for the twins to sleep in during the day, and thousands of nappies. Also, the amount of washing. I could have shares in Fairy Non Bio I swear. We also needed a bigger fridge once the twins started to wean – I didn’t think they would get through so much food for such tiny humans.

We soon realised that there were going to be things that we just wouldn’t be able to do with three young children, like we did with one. For example, swimming. A lot of pools will only allow one adult to one baby, and as we have 3 non-swimmers we just can’t go. I don’t feel so bad about it right now as the pools are closed, but I did feel some mum guilt that the twins wouldn’t get the same experience as Immy.

Hotels are another thing (again, not really relevant in current times, thanks Covid), but we now need 2 rooms in a hotel instead of one. So a cheap get away isn’t such a cheap getaway anymore. The day we have to take a flight with all three of them will be interesting to say the least.

Time is of the essence when you go from one to three children, and I’ve become a multitasking ninja. The one thing I don’t manage to fit in at the moment though is a workout! Before having Immy, and after having Immy, I was quite into my fitness. At the moment though, I just can’t find the time. Well, I could find the time if I really wanted to, but I enjoy my hour in the evening after putting the kids to bed and before going to bed myself to have a glass of wine and to write. I’ll get back to it eventually, I know that. And when I do, I’m sure I’ll write about it here!

I feel like I’ve concentrated on the challenges a fair bit above, but there are so many positives to having three children. The bond I can see developing between them makes me feel so proud. They have also started playing together. There is never a quiet moment, and I never feel lonely. There’s a buzz around the house and it reminds me of my childhood and how I always had someone to talk to or play with. It’s what I’ve always wanted for my children.

I really don’t think there is a ‘magic number’ of how many children is the most stressful though. It’s an awfully negative way to look at things. I count myself lucky to have one, let alone three children. Every child is different. Every family is different. Every flippin’ day is different! So I try not to compare myself to others, even though sometimes it can be easier said than done. Because nobody knows your life and your children better than you do.

So to end, I’ll say the journey from one child to three has been a life changing rollercoaster of sleepless nights, bonkers days, and learning to choose your battles. You learn to multitask like you’ve never multitasked before, and become a dab hand at doing daily chores with one hand (or your elbows/hips/whatever doesn’t have a child hanging off it).

Yes it’s true that we have our hands full right now, but I’ll tell you something; we have even fuller hearts.

This site uses Akismet to reduce spam. Learn how your comment data is processed.